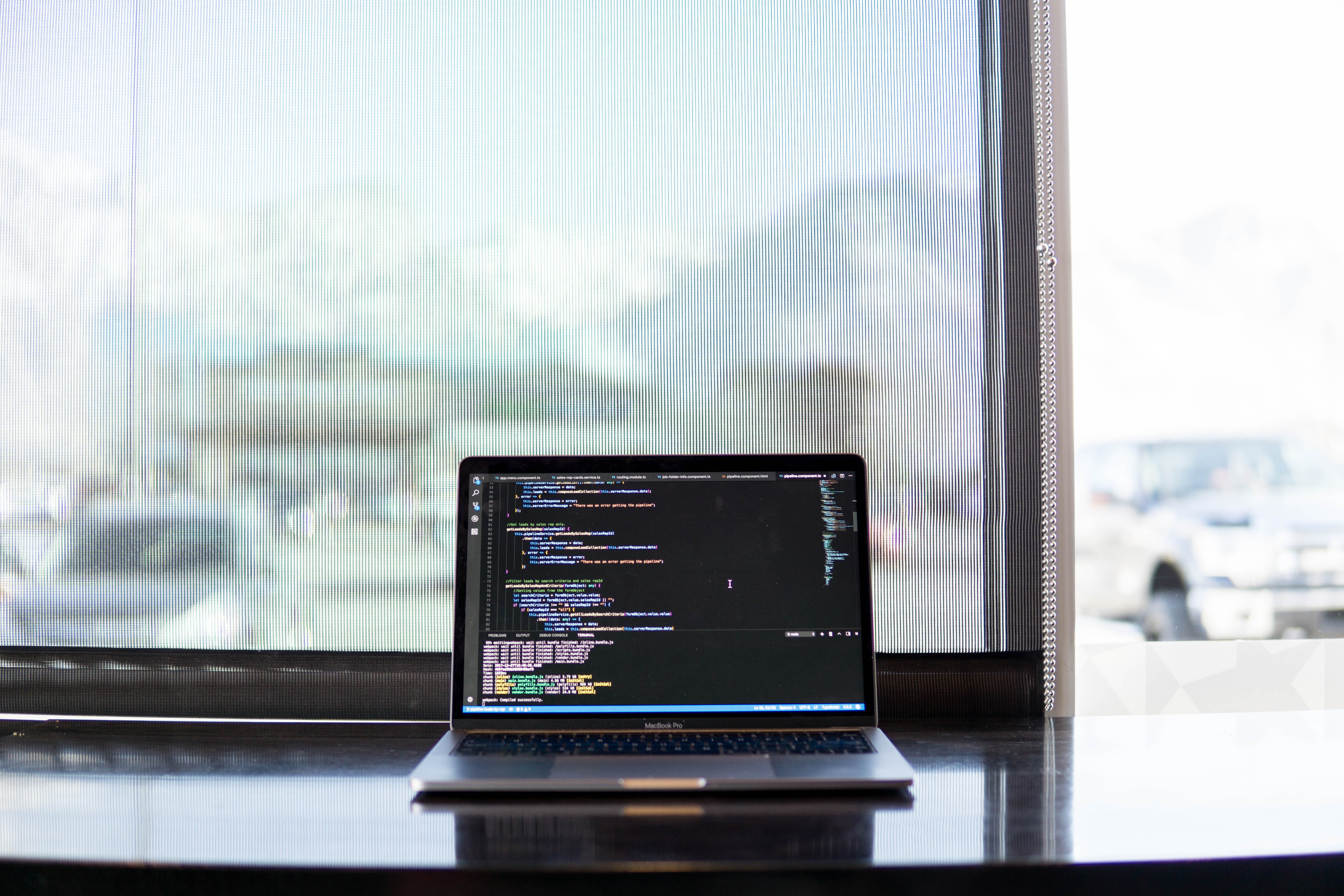 With a growing frontend codebase incorporating various external libraries, we noticed an increase in our bundle sizes and build times. This alarming trend (along with the subpar Lighthouse rating of 49, attached below) led us to undertake a project focused on a series of frontend enhancements and optimizations, which we will cover in this blog. 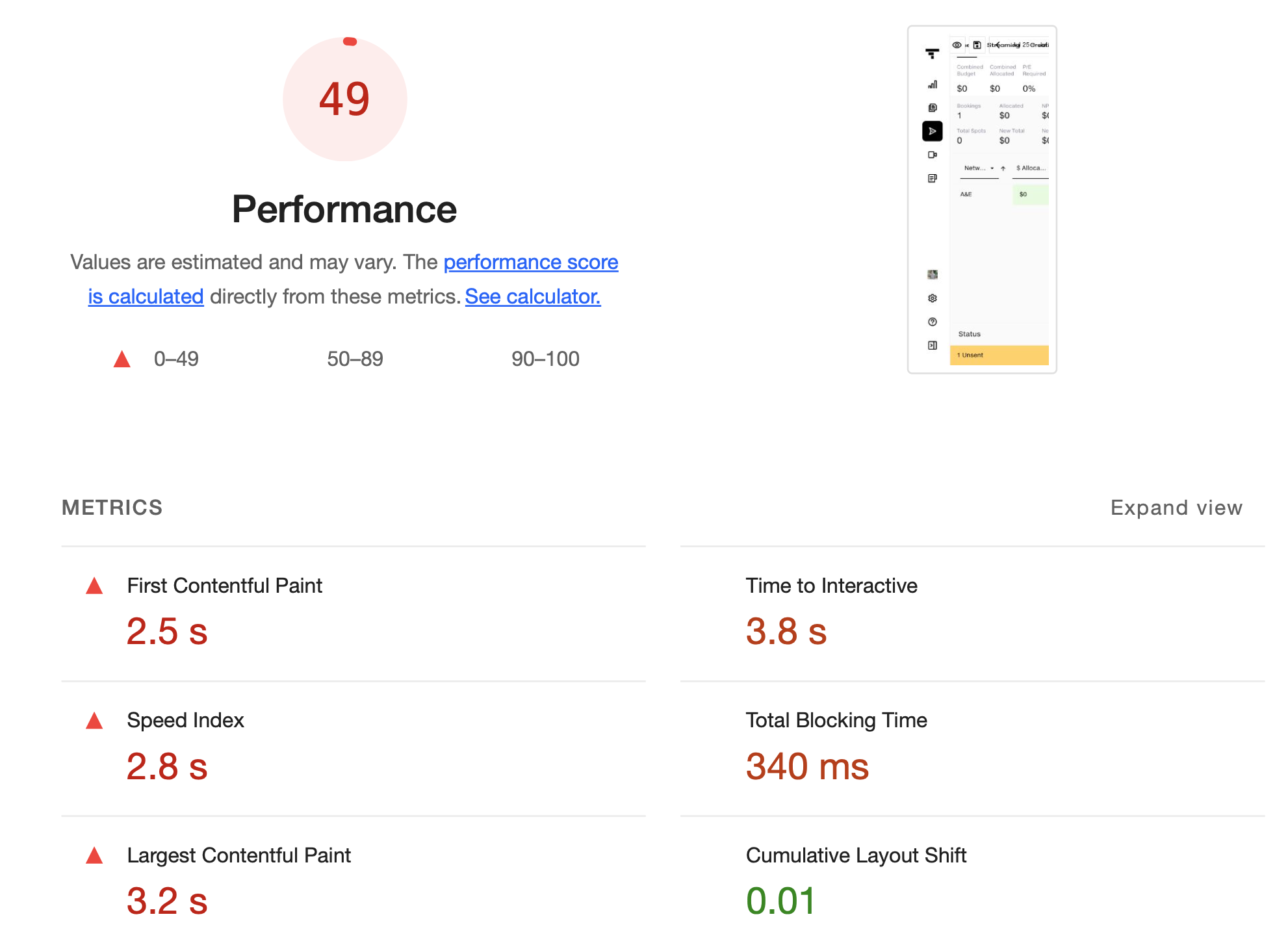 Prior to making any changes, we first wanted to analyze and profile our existing setup. To do that, we used the WebpackBundleAnalyzer plugin to view the relative heaviness of our bundle files.

Below are the results. 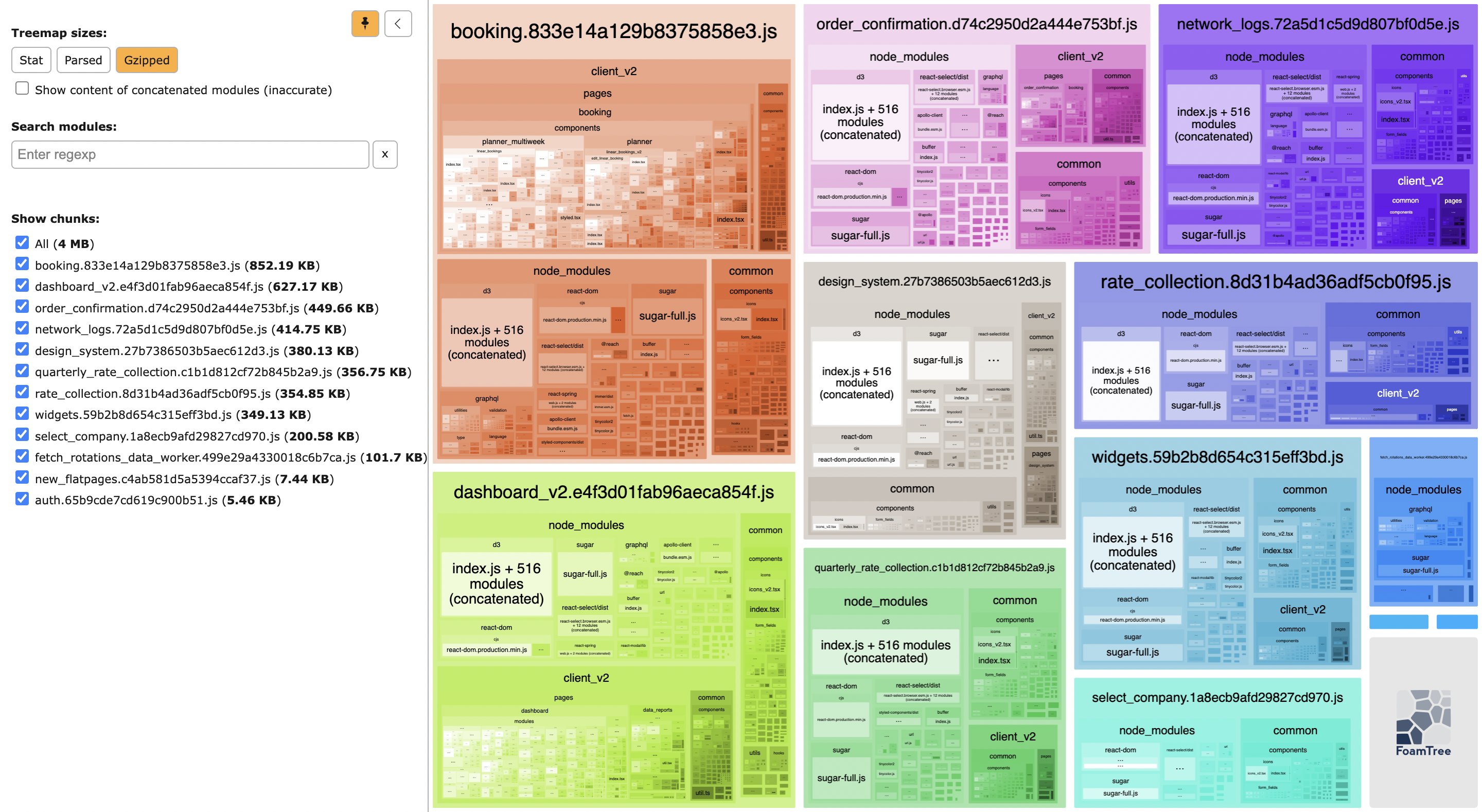 Given the large sizes of our app bundles, Dashboard and Booking in particular, splitting them up into smaller parts that can be loaded dynamically was a natural first improvement to undertake. As a proof of concept we selected one of our smaller modules, the Tatari Design System (TDS) component gallery, which was well-suited for route-based code-splitting, i.e. lazily loading each demo component, instead of loading the entire TDS chunk at once.

So we went ahead and imported our separate TDS components (under /demos) using React.lazy().

Well, this would have been too easy. With this change, our modules were seemingly being imported dynamically, but the bundle was not split up into individual demo modules, as expected.

It was time to put on the lab coat! 🥼

We currently use the ts-loader plugin as a typescript compiler that picks up the config from tsconfig.json and transpiles accordingly. By default within the config’s compilerOptions, module was set to commonjs & dynamic imports import() is supported when the module is set to esnext, commonjs, amd, system, or umd.

As an extra complication, enabling module=esnext ended up conflicting with our resolveJsonModule setting, unless the moduleResolution=node was also present in the config.

But, what is module resolution?

“It is a process that the compiler uses to find out what an import refers to. Basically, what “shape” is the module? Read more here.”

Setting the moduleResolution=”node” created a separate issue with our way of importing the CommonJS modules!

How things led us to enabling esModuleInterop?

For moduleResolution=”node” to work, we needed to fix a number of imports throughout our codebase, where we required some legacy CJS modules, e.g. import cookieSession = require('cookie-session'). After changing such import to import * as cookieSession from ‘cookie-session’, Webpack prompted us to enable allowSyntheticDefaultImport flag which just suppresses the prompt! (How? That’s next!)

This now created another problem, the cookieSession() was not callable! As with the syntax import * as cookieSession from ‘cookie-session’, it (namespace import) needed (according to the es6 spec) to be a plain object and not a callable().

All of this occured because of the typical export = behavior of the CJS module, cookie-session. We wanted to make it a default export and should be able to use it like import cookieSession from ‘cookie-session’ and be also able to call cookieSession();

That’s where the esModuleInterop flag comes in! It’s a bit more advanced than the allowSyntheticDefaultImport flag and also enables the same when itself is enabled.

So what does it do?

It enables the use of CJS modules as per the ES6 Module Specs. In layman terms, it wraps the exports = thingy into a default export! Super crazy!

As we can see above, it wraps the export into a default export if the module is not an es6 module. Simple. So with this flag enabled, we were able to get rid of the import issue for CJS modules like, cookie-session.

Post this change, we started to see separate chunk files being made for our tds module within the build! 🥳 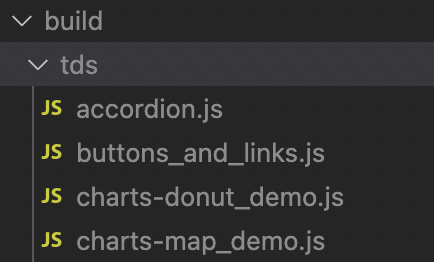 That’s becuase we introduced webpackChunkName into our dynamic import syntax!

Result: Our design_system bundle was split up into separate demo component files, now correctly lazy-loading based on their route!

With a successful POC, we were ready to enable code-splitting for our bigger modules, e.g. dashboard and booking.

When importing modules dynamically with React.lazy(), there can be a brief loading delay, so it’s a good opportunity for React’s <Suspense> to render a spinner. For example:

It was now time to visualize the bundles! 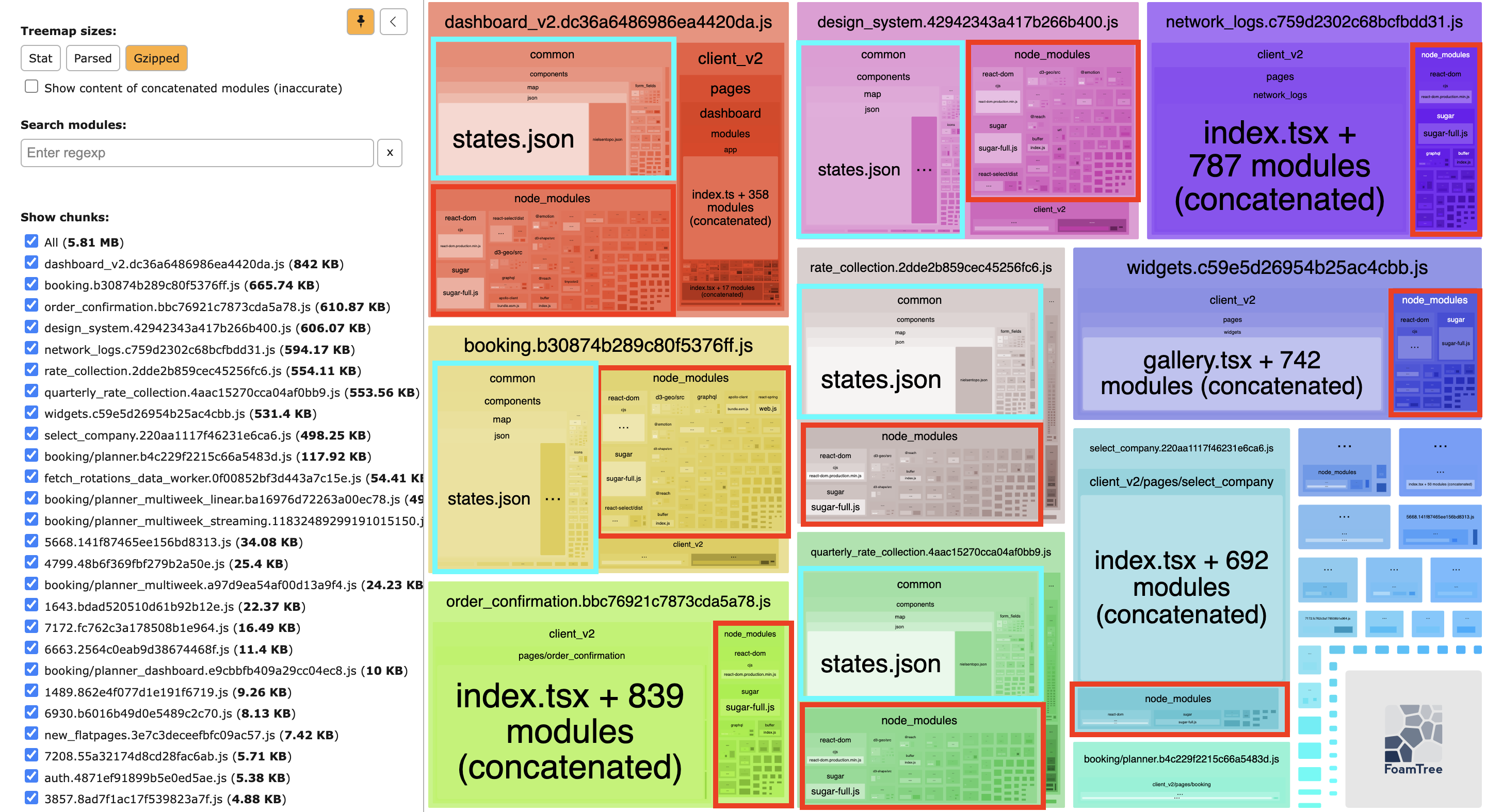 Success! The root dashboard and booking bundles shrunk, however, we could see the presence of node_modules and our common lib being duplicated throughout the bundles 🧐

So, the next logical step was to extract out node_modules and our common code into their own separate chunks and import them in a deferred fashion (asynchronously), so that they are not render blocking.

To extract shared code while deduplicating its usage throughout, we turned to the SplitChunksWebpack plugin. Tweaking the default settings a bit, we were able to extract out our node_modules into its own chunk named libs.js, and our shared components & utils into a common.js chunk.

Subsequently, we added script tags to load these new files into our pages in a “deferred” fashion.

What help did defer do?

With the SplitChunksWebpack plugin applied, let’s review the WebpackBundleAnalyzer results below. 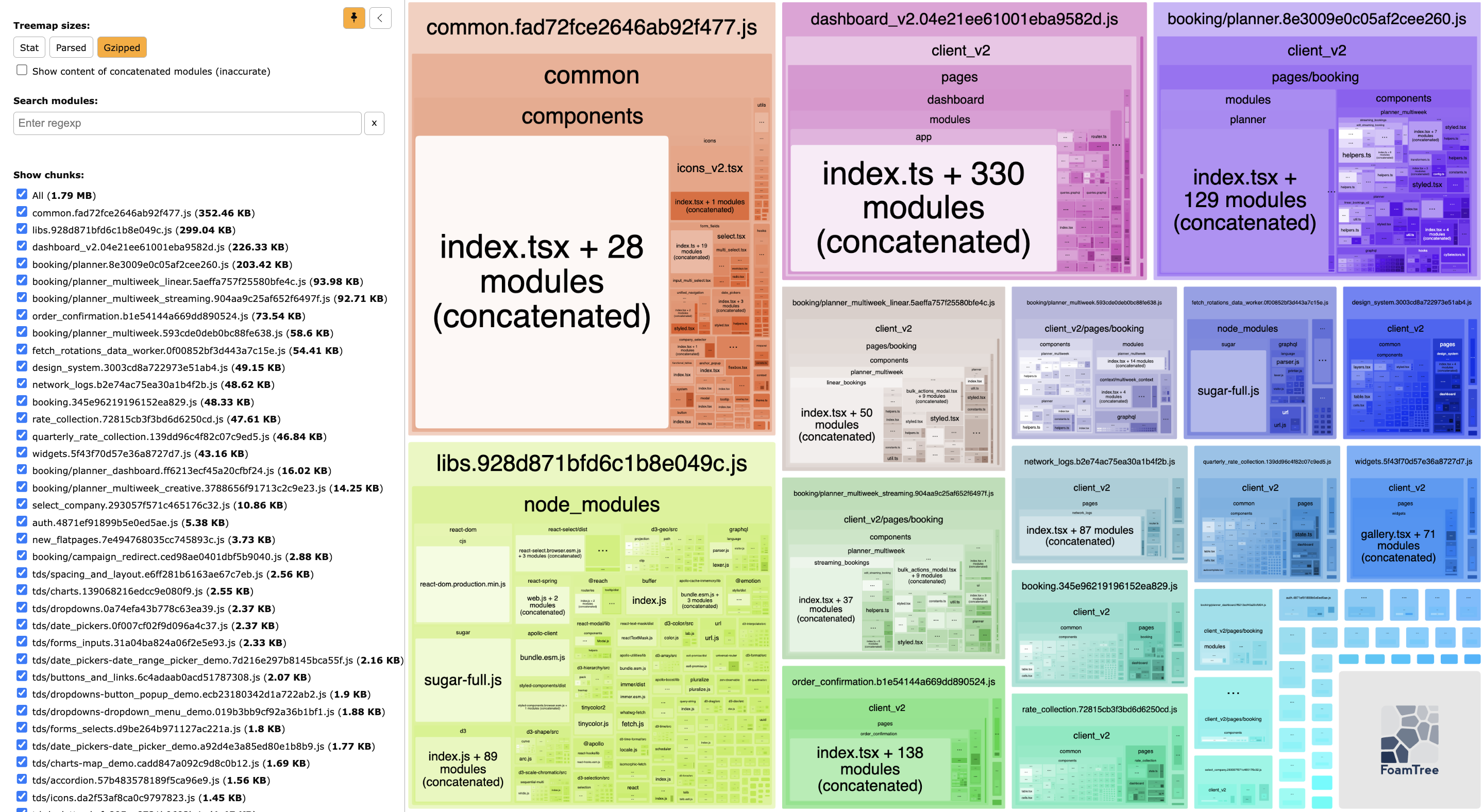 We significantly reduced the size of our entry point bundles!

So far, so good, but we weren’t done yet! Another improvement was the addition of compression, which proved fairly easy to retrofit. Within our Node server layer, we enabled the use of the compression middleware to serve the response with the header: content-encoding: gzip.

It attempts to compress response bodies for all request that traverse through the middleware. Under the hood, it creates a compressed stream of response and sets the Content-Encoding header. 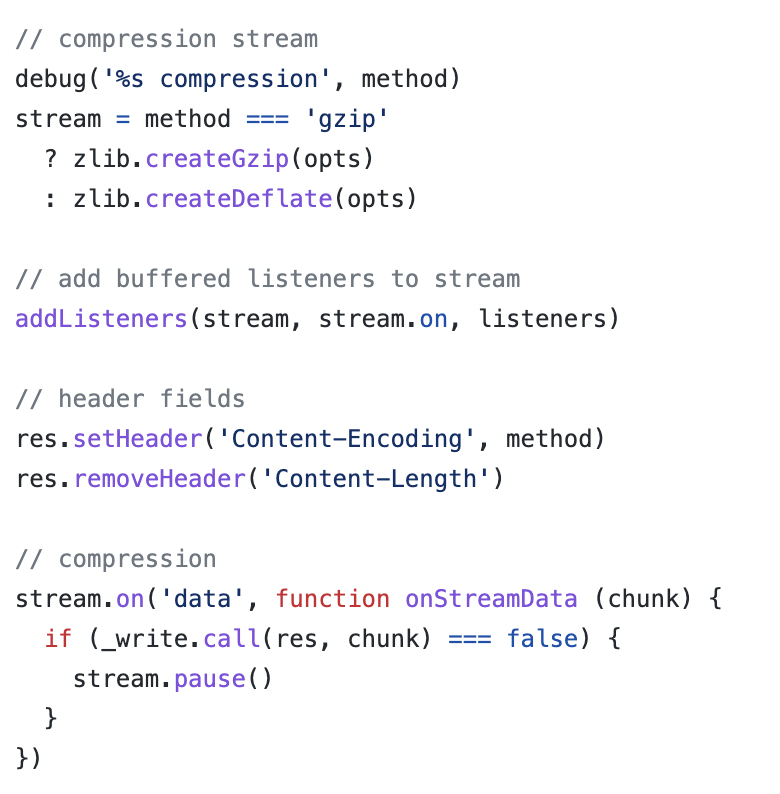 This change significantly reduced the sizes of our response payloads, by 60% on average.

For e.g. on a standard route serving 3.5 MB of resource, the finish time got reduced by nearly 60% after enabling compression middleware.

Now, that we have optimized our bundles and page load speeds, we are turning our attention to speeding up our Webpack build times. To do so, we are exploring tools such as esBuild.

Our first step here was to configure the existing TerserWebpackPlugin to use the esbuildMinify, replacing the default terserMinify, making the minification process notably faster.

Below is a comparison results of different minification tools on the artifact React v17. Ref. 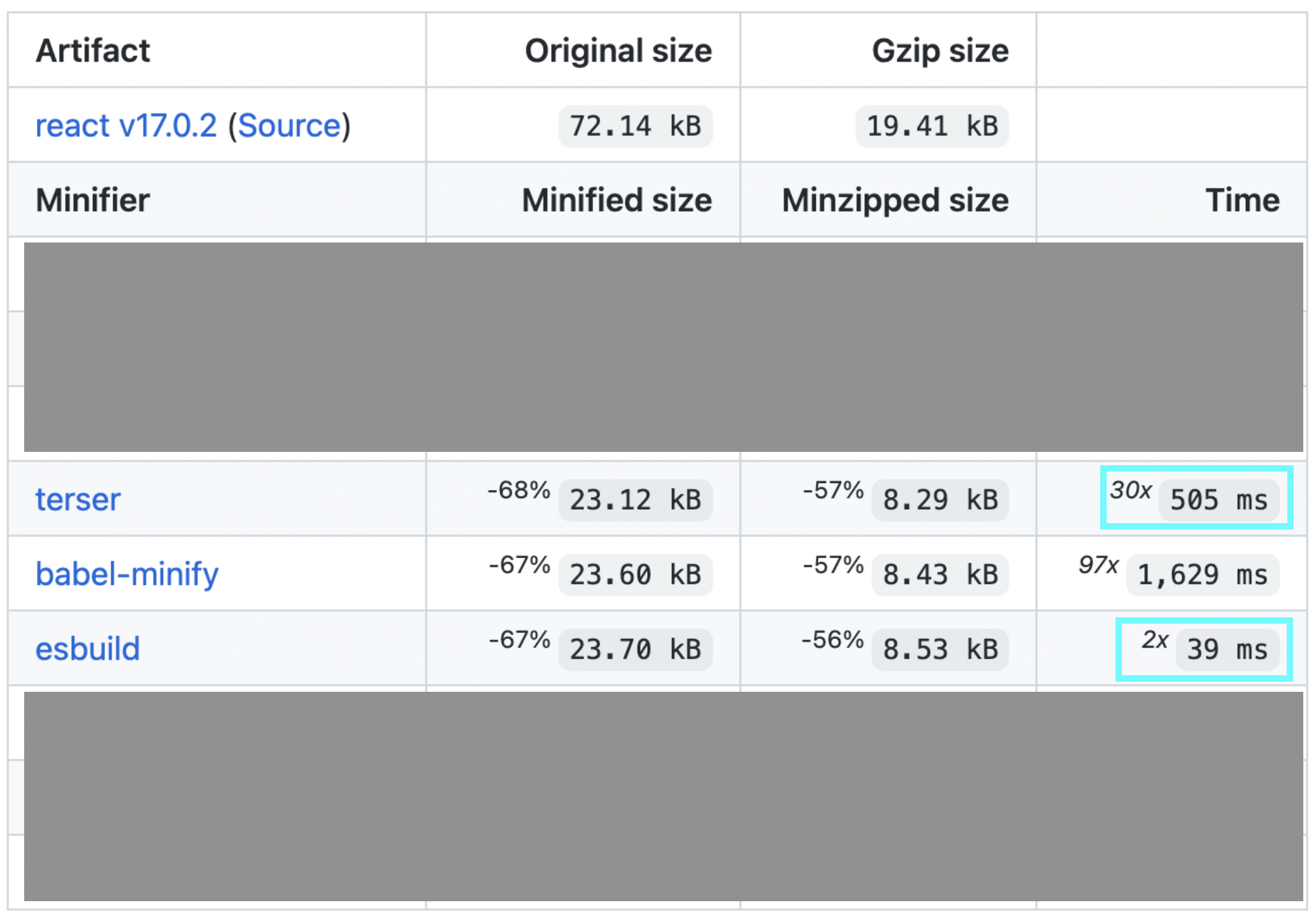 While our journey continues, the above optimizations are already bearing fruit. For instance, on our Campaign Manager a.k.a. booking app, we have experienced a Lighthouse performance score increase from 49 to 94 on average! 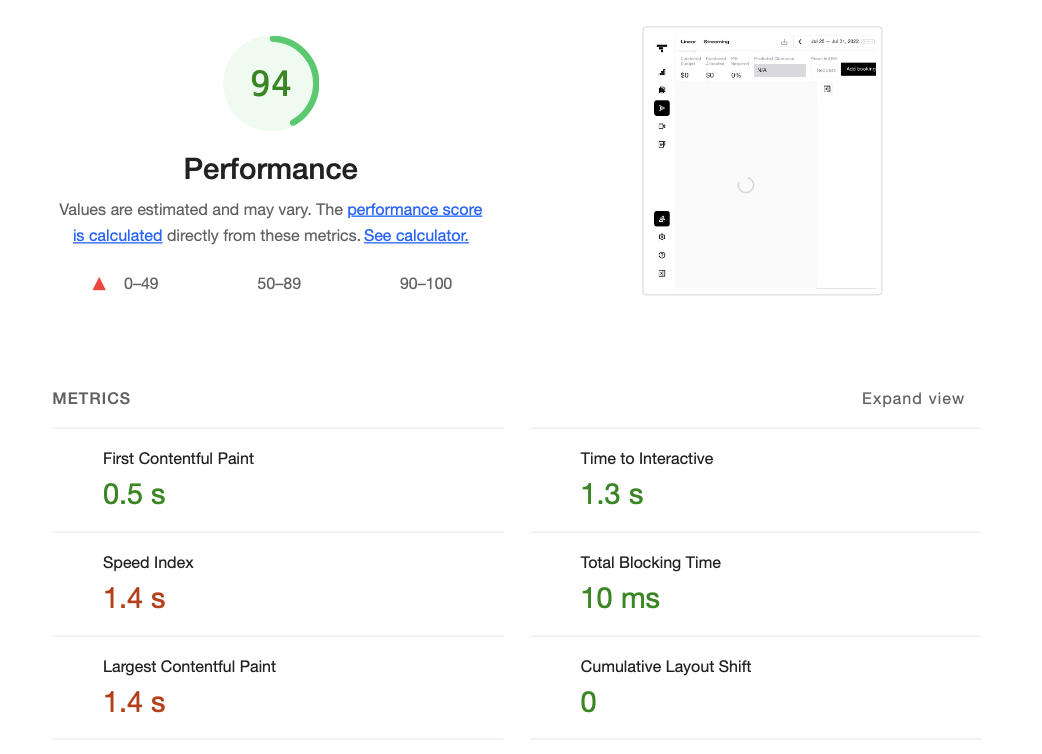 We continue to explore the latest approaches in order to provide our users (and developers) with the best experience and have lots of fun doing it. Thank you for reading! 🤘 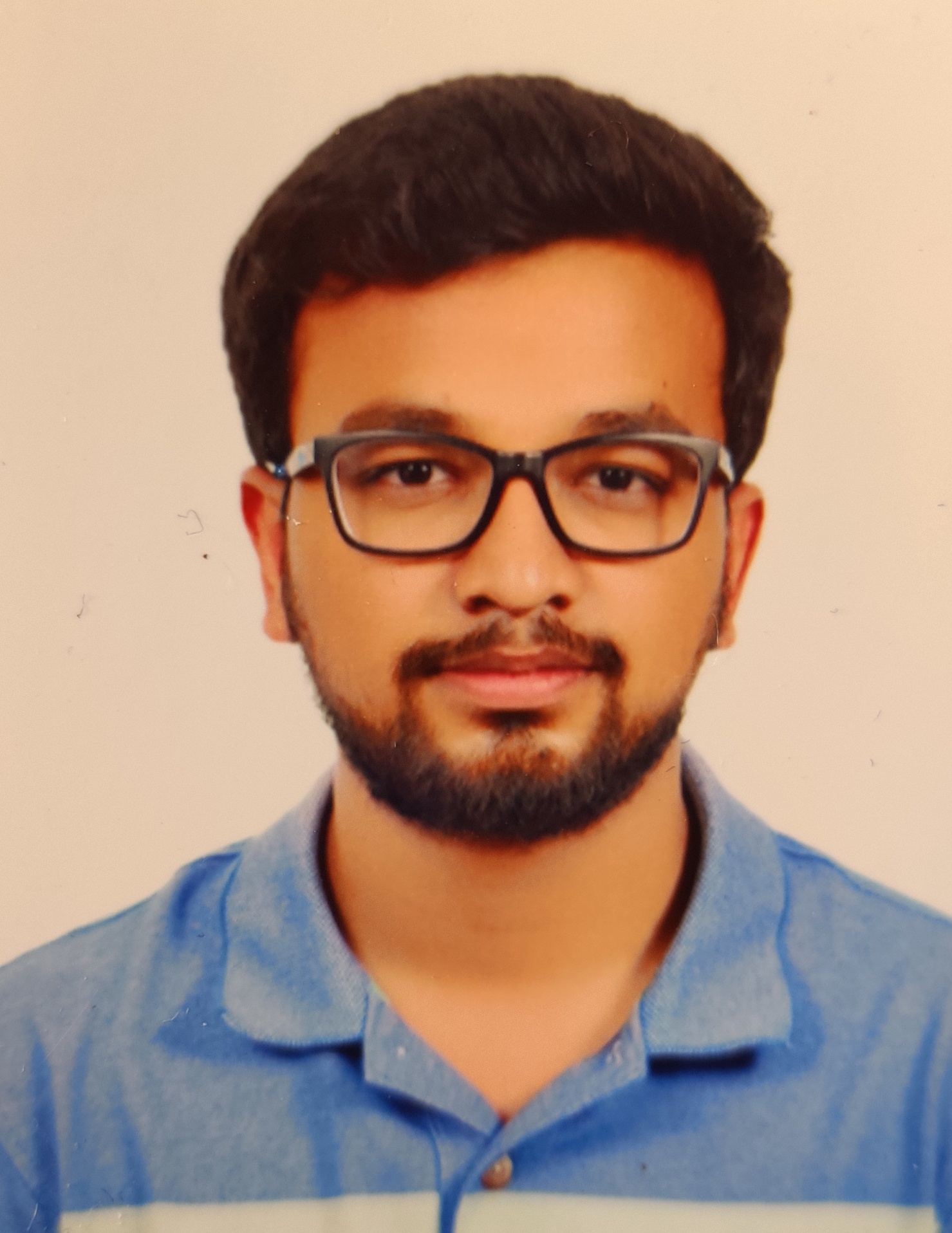 Rahul is a Frontend Developer Intern at Tatari